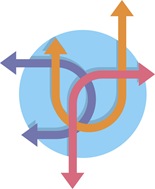 This morning I woke up thinking about my last post and realized that I had missed an important piece of the puzzle: the ultimate goal of being “connectional,” that is, what are we trying to achieve in connecting.

That is an important question to ask, for the goal helps to determine the tools and means by which we reach that goal. Thinking about the connective tissue that holds us together, there are very different requirements needed for joining an ankle to the foot than for keeping an arm on at the shoulder. Or, to use the computer network analogy, the connectional requirements are determined by the outcome. One wouldn’t use a dialup telephone line to transmit video to the net, nor would one pay for a full fiber connection if one is simply concerned with checking e-mail.

What we do in the United Methodist Church is proclaim that we are connected while rarely saying what we are trying to achieve in that connection.

So, what are some goals, some outcomes, of being connected?

One that I have mentioned some years before is understanding our connectedness as a prophetic witness to the world. We live in a society (in the United States that is) in which individualism reigns supreme. This individualistic spirit plays out in the church world in the rise of congregational polities which suggest that each church is an island unto itself and that there is no mutual responsibility to one another, a belief that the Apostle Paul would have fainted over. To proclaim ourselves as the Body of Christ means that we are not individual body parts strewn over the landscape like some abstract painting. No, bodies are connected, with connective tissue holding them together. This tissue holds things in place so that the body can do what it was created to do, and likewise being a connected church enables the body of Christ to do what it was created to do. The prophetic witness of being connected says that we are in, as Martin Luther King Jr. said, “a network of mutuality” created by God. This witness means that we may give up some of our rights, that we may use certain common protocols and language in order to be a part of something larger than ourselves brought into being by Jesus Christ, so that “as we say in the United Methodist world” disciples are made for the transformation of the world.

That goal is important, however I recognize that there are few practical justifications or goals for that understanding of connectionalism, and that goal is nebulous enough that it says little about the means of connection, the connective tissue and protocols needed to ensure that connection is made.

Moving to practical considerations, I would argue that the primary reasons for being a connected church rather than a disconnected one are efficiency and effectiveness, especially within a regional area like a District or Annual Conference.

Now I confess that sometimes the “e” words above make me squirm a bit in regards to the church. I think the scriptures as a whole push on those concepts, suggesting that process is as important as outcome. Jesus wasn’t especially efficient in his ministry and folks have commented throughout the ages that he only had twelve in his church, and they all abandoned him with the Romans showed up. I don’t believe in the rhetoric that the church should be run like a business that seems so popular among finance committees and leadership consultants.

Yet, I also understand that a truly connected church provides some benefits in efficiency and effectiveness over that of an individual congregation in considering ministry in a particular geographic area. Thus, if we were really connected in Nashville where I live and serve, our denominational leaders would be seeing congregations not as a bunch of individual stations, but instead part of a synergistic network designed to help people come to the knowledge of Jesus Christ. These leaders would be able to evaluate the effectiveness of the various nodes in this network and direct resources and attention to those nodes which seem to be less effective. True connectionalism based in the desire to be more effective in spreading the gospel would allow honest conversation about the needs of our city, and help us in making hard decisions about how to spend our time and money.

Instead, we have the rhetoric of connection while maintaining a covert sense of congregationalism. That is why we can have four United Methodist congregations within a square mile, all of whom are struggling to pay for buildings built in different times, all of whom have been either simply maintaining or declining, and all of whom believe that THEIR church shouldn’t be shut down. While we should do everything we can to facilitate transformation, there are times when understanding ourselves as connected in a deeper way would open up the space for conversation on the viability of those congregations, and how these congregation might work cooperatively to bring forth God’s kingdom on earth. Instead, we keep these congregations on life support out of a fear of alienating church members.

These are not the only goals in being a connected church. What do you see as the benefits of being connected?

3 thoughts on “The Goal of Connecting”