In lieu of writing a formal review of the 2008 Acoustic Christmas show, here are a few superlatives that reflect my opinion of the evening.

As I stated earlier, I was surprised at the level of talent overall, expecting a few clunkers along the way. There was one who didn’t make the grade . . . but that is for another reward. In choosing the most talented, I am considering overall musicality as opposed to showmanship.

Part of what drew me to these two acts was how well they filled the house with very simple instrumentation and vocals. These two acts took the acoustic part of the night seriously, and demonstrated their talent. I confess that the singer/songwriter stylings of Sara Bareilles is more to my personal liking, and her talent both on piano and with her vocals is immense. I was disappointed that she was only allotted three songs, but knowing the audience at this show, it made sense.

Boys Like Girls was much more in tune with the teen audience, especially since the lead singer is “hot” (in the words of some thirteen year olds that I know). What was more impressive was their mastery of their guitars, with a complete understanding of the blend between the two and what they were trying to accomplish. As guitar players, they were as solid as anyone on the stage last night, and I feel like I will need to check out their music in the future.

Most Likely to Be A One Hit Wonder

No doubt at all – Kevin Rudolph. Why? Because frankly there wasn’t much there. In fact, if it wasn’t for the DJ and rapper surrounding him, Rudolph without Autotune would be pretty miserable. His hit, “Let It Rock”, has some interesting production and if Rudolph functioned as the writer and producer of the track, then he may have some ability to do more in the music biz. However, this heavy metal gansta wannabe should get out from behind the mic and focus on guitar and production.

Most Fun To Watch While Girls Are Squeeling

Blake Healy and Anthony Improgo of Metro Station. Of course, if you were to ask any girl at the show the draw for this teen pop phenomenon is Trace Cyrus and Mason Musso. I frankly don’t get Trace Cyrus other than the age old desire among young women to go after the bad boys, thinking that they are more interesting (even in the face of their drug and alcohol addiction, bad behaviors, etc.). And, although they were the “headliner,” I haven’t been that impressed with Metro Station’s music in the past, thinking that it was pretty typical teen pop with a synthesizer emphasis. However, as Cyrus threw guitars on the stage and attempt some Pete Townsend like stage hops (Pete did them better in the day), I found myself drawn to Improgo. The man was playing a small set – snare, a single tom, a kick drum, high hat, and a single cymbal – but he made that set sound much larger. Improgo was a machine in his playing – keeping solid time and engaging in stick work that was amazing to watch. Healy, on the opposite side of the stage, was a blast in his ability to move the stage around, his foot work while he played, and just a sense that he was having fun with the whole thing. Musso isn’t a bad singer and guitar player, and Cyrus exudes some Iggy Pop kind of energy, but it’s the backup band that grabbed me last night.

Most Likely to Appeal to the Bon Jovi Crowd 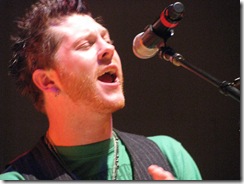 Saving Able is best known for the anthem “Addicted,” which is a solid song that has gotten a fair amount of top forty airplay. However, it was clear that the average age of the band was closer to my age than my daughter Grace’s, and their solid rock groove was very reminiscent of similar groups in the past. It will be interested to see if they stay on the pop/rock circuit or if they make the move to country, for the songs they sang could appeal to a blue color, modern country crowd. Kudos to them for being the only group to attempt a Christmas song during the night.

Most Likely to Cause People To Raise Their Eyebrows

Lady GaGa, for sure. Hers was the most theatrical and maybe most entertaining set of the night, an amazing set of three or four songs that flowed together and was choreographed with precision. It was clear that she was a New Yorker for where the other acts tried to tame things a bit recognizing the younger audience, Lady Gaga had no problem whatsoever dropping the F-bomb. In some ways what I saw was what I imagine a Madonna show is like – very produced and thought out, but with good musicality as well. Lady GaGa sang all her stuff live, without lip synching, in the midst of some pretty advanced dance moves. When she was done, after we all caught our breath, all the adults up in our section looked at each other and said “Whoa!” Anna’s take was that she was the most bizarre of the evening, and I’m not sure she isn’t too far off. However, there is talent there that can’t be easily written off, and I would say that her set was as much a piece of performance art as it was a concert performance.

The girls would likely give this to Trace Cyrus or Martin Johnson of Boys Like Girls. However I would say that it is a toss up between Shontelle and Brandi. I could say more, but there really isn’t much to say.

I am sure that there are many more awards I could give: DJ Most Likely to Buy You a Shot (DJ Lunchbox); Most tattooed person onstage (tie between Trace Cyrus and the drummer for Kevin Rudolph), but the hour is late and I have work to do. All in all it was a good night and The River is to be commended for hosting a good show.

One thought on “Acoustic Christmas Superlatives”