I don’t want to preach this sermon.

You see, I find myself this morning still in the throes of Christmas.

Yesterday, when I logged on my computer, I looked as always to my Google Talk chat window to see who was online. I saw that my friend Jordon was online, and noticed that he had written in his status window that “Christmas is over…” However, I knew that he was wrong, for we still have six more days of Christmas to celebrate. We find ourselves today on the sixth day of Christmas, the day when our true love gives us six geese a laying, and knowing that we are halfway to the coming of the Magi at Epiphany. Christmas isn’t over is it?

Six days ago, we sat in these pews and sang of Bethlehem. “O little town of Bethlehem,” we sang, “how still we see thee lie, above thy deep and dreamless sleep the silent stars go by.” Six days ago we sang of cattle lowing and a baby who did not cry when the cattle woke him. Six days ago we were filled with thoughts of family and presents and good will as we lit our candles, drank our eggnog, and drifted off to sleep with the images of a precious baby in our dreams. 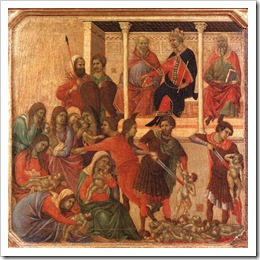 But today, those images have been rudely replaced. Today we hear of a Bethlehem that is far from silent. Today we hear the cries of children as the powerful pull them from their cribs in their desire to hold onto power at all costs. Today, there is blood in the streets of Jerusalem. And we are reminded that the story of Christmas isn’t just about sweetness and peace on earth. No, part and parcel of the story of Christmas is a reminder that from the very beginning of his life, the Prince of Peace has been stirring up trouble that makes those who rule with power lash out in fear in the knowledge that their kingdoms are coming to an end. It’s a reminder that the story doesn’t simply lead to palms and accolades when Jesus enters Jerusalem many years later; a reminder that the little tiny baby that we worship today is destined to be killed by those who fear him the most.

This story that we read this morning stretches us and turns our sense of time and place inside out. You see, the story of Christmas is a story of God’s coming into the world, and according to the storytellers, that coming is messy, based in real life, with serious consequences. It’s not as if the king of the world could sneak in through the back door and not attract attention to himself. No, like the overthrow of all kingdoms, there is violence, bloodshed, and innocent people in the crossfire who get hurt.

The story is familiar. It’s a story of another dictator who takes control of a particular part of the world. This dictator rules with an iron fist, freeing using any means necessary to ensure that he remains in control of the country. His is an oppressive regime, unconcerned about the well being of his subjects as long as power remains in his hands. And then, something comes into the picture that threatens his control and he lashes out with ferociousness, running over anything in the way of his domination. It is a story that has been repeated through the ages, since before the time of Herod and Jesus, and continuing to the hills of Iraq and Sudan today.

For Matthew, the one who tells us of Herod’s crime against humanity, this story echoes an earlier story in scripture – the story of Pharaoh in the time of Moses ordering the death of great numbers of children in an attempt to consolidate his power. For Matthew, the story of Jesus becomes another case of human power rebelling at the news that his reign will soon come to an end and one who will “set the people free” enters the world.

The problem with both of these stories is that it is the innocent that suffer along the way.

After all, in both accounts it is the heroes of the story – Moses and Jesus – who escape the fate that awaits them. Moses escapes by floating downstream in a basket until he is taken into the very household of the one who wants to kill him. Jesus goes free when his family escapes to Egypt, a reversal of the story of Moses so many years ago. These heroes live to see another day.

But there are those who don’t. This story reminds us that in our world today (this morning in fact) there are mothers crying in the streets for lost sons while we snuggle close in our comfortable sanctuary. This story reminds us that today (right now) horrific acts are being done by people in power throughout the world as we sit in our pews and worry about what we will eat for lunch after church. This story comes in the middle of Christmas and reminds us that we have been blessed to walk free, while the blood of the innocent runs freely in other parts of the world . . . blood that we would rather not see in our own desires for power and comfort.

Today, some thirty thousand children under the age of five will die around the world. In the time that we will be here in worship today, some 1,200 kids will have died. The causes are many: war, poverty, hunger, preventable diseases. And yet, even though we lose as many children in a week as were killed in the 2004 Asian Tsunami, rarely does a cry go out or the plight of these children get reported in the news. Children remain the hidden casualties of war and poverty in the world, unseen in the reporting on bombs and political responses. In Somalia alone, the site of the most recent fighting for power, some 1.5 million children are at risk in the middle of the battle. Worldwide, mostly on the African continent, there are over two million children under the age of 14 living with HIV/AIDS. And yet, we rarely hear about them. They remain invisible to us, and if we are honest, we often prefer it that way.

You know what I mean, don’t you? Haven’t you had the experience of flipping channels on the TV and coming across some public service ad featuring that actress from All in the Family encouraging us to sponsor a child? Haven’t you come across those pictures of children with flies across their faces and swollen bellies from malnutrition? And haven’t you found yourself quickly changing the channel to find “something good on TV?”

You see, when we have to face the slaughter of the innocents, as we do today, we have to face up to the fact that there are kids dying all around the world, and we are standing by, eating our McDonalds hamburgers while it happens. When we look this story that Matthew gives us today full in the face, we begin to recognize that we sometimes turn our backs on the crying children of the world so that we can maintain our own comfort and control. No, we don’t want to hear this story of the massacre in Bethlehem. It makes us ask hard questions . . . questions that we certainly don’t want to think about at Christmas.

“But preacher,” I can hear some saying, “there’s too much suffering in the world. How can we be expected to bear this burden? What can WE do to help the children of the world? Certainly we can’t solve the problems, can we?”

No, I doubt that any of us has the resources on our own to wipe our poverty and disease in the world’s children.

But what they need more than anything today is to simply be heard.

No, I didn’t want to preach this sermon. I would rather stick with the lights and garlands and the sweetness of Christmas.

But I have heard the cries.